How QuickSwap’s New Predictions Market Could Conquer the Mega Bear

“Toto, I’ve a feeling we aren’t in Kansas anymore.” The phrase applies as much to cryptocurrency’s current market conditions as it did when Dorothy uttered those words after entering Oz. Sad as it is, the DeFi summer and bull market of 2020-2021 are over. Projects and companies that many thought were too big to fail are crumbling left and right. Although sentiments on Crypto Twitter are particularly dire, with many users claiming they’re done with crypto forever, somewhere over the rainbow, skies are blue, and the dreams of profitability that you dare to dream, really could come true.

Dragons Fly Over the Rainbow

During the DeFi summer, decentralized exchanges (DEXs) emerged as the very heart of DeFi, facilitating the exchange of assets between peers with no middlemen taking control of users’ private keys. But as traffic increased on Ethereum, major Layer-1 DEXs, like UniSwap, faced severe problems. Network congestion, high gas fees, and slow transactions led many smaller traders to look for alternatives that offered a lower barrier-to entry. Very soon, Polygon and QuickSwap became the go-to solution for money-conscious traders who didn’t want to spend an arm and a leg on gas fees.

Once you go Layer-2, you never go back

As the most recent crypto bull market came to an end, gas fees on Ethereum returned to tolerable levels (for some), but those who crossed over the EVM-rainbow to Polygon and QuickSwap won’t be going back anytime soon.

If low gas fees, attractive liquidity mining rewards, and high APYs for stakers aren’t enough to keep users engaged in the Polygon and QuickSwap ecosystems, the launch of PRDT Finance’s new Predictions Market should do the trick.

Soaring Over DeFi’s Next Level

On June 10th, QuickSwap debuted the predictions market built by PRDT Finance on their beta UI. 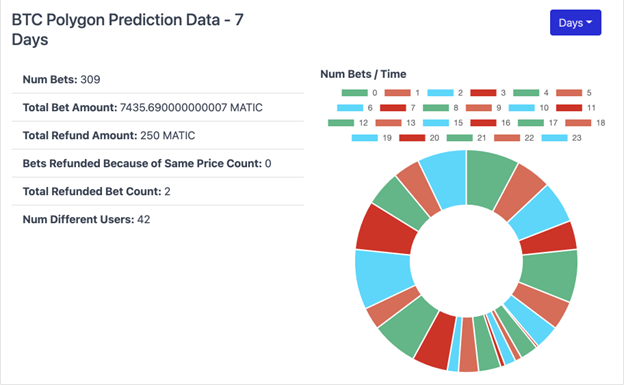 In the few days since the predictions market has been up and running, nearly 7,436 MATIC (worth roughly $3,063.51 at the time of writing) has been wagered on the platform. While that might not seem like much, it’s a lot considering that the predictions market is currently only available on QuickSwap’s beta UI, which has a mere 15.1 thousand visits compared to the 1.3 million visits to the DEX’s legacy UI. As Roc Zacharias (one of QuickSwap’s co-founders and CEO of Lunar Digital Assets) recently told Bitcoinist, “We’ll be moving our beta UI to our legacy address within the next couple of weeks”.  That means that very soon, PRDT’s predictions market will be exposed to an additional 1.28 million users, which should mean more activity for the predictions market.

How does that conquer crypto’s bear market?

As QuickSwap explained in their blog that introduced the possibility of a predictions market, users of PRDT’s platform pay a 3% fee to place a wager. 40% of the fees collected are used to market buy QUICK and distribute to stakers in the Dragon’s Lair.

Based on the example from one of PRDT’s other partners, it is reasonable to assume that 1% of the DEX’s daily trading volume could be used to play on PRDT. In the month of May, QuickSwap’s trading volume was nearly $1.5 billion.

According to the DEX’s most recent newsletter, Dragon’s Lair stakers received approximately $500 thousand in staking rewards in the month of May. If the predictions market were to perform as the above model suggests, stakers would have earned an additional 36% APY, and that’s with the DEX’s lower than average bear market trading volume. Can you imagine what could happen in a bull market?

Staking is one way to beat the bear market with QuickSwap and PRDT, but it isn’t the only method. 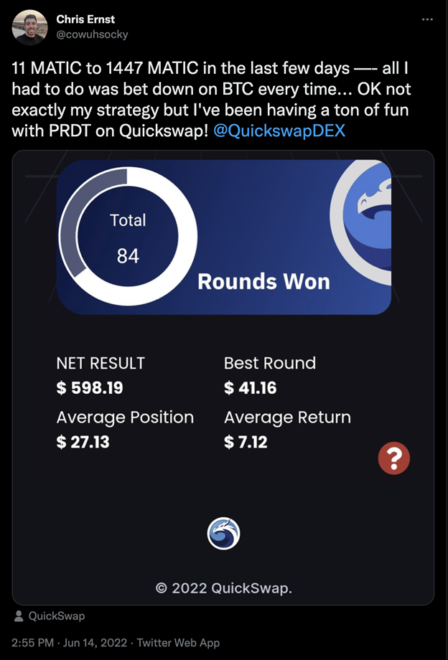 QuickSwap and PRDT user Chris Ernst recently tweeted about how he turned 11 MATIC into 1447 MATIC in the few days since the predictions market has been open. That means Chris gained over 13 thousand percent in just a few days during a bear market, and he isn’t the only one.

Somewhere over the rainbow, dragons fly. As everyone must know by now, dragons eat bears, and you can too! QuickSwap and its featured PRDT Finance Predictions Market are entirely permissionless, so anyone can use them to beat (or eat) the bear market blues. Just keep in mind that the opportunity to gain doesn’t come without some risk, and always do your own research.

More Than 65,000 New Child Care Workers Will Be Needed to Meet…